So…how many Drupal people know the reason why officials were afraid the Indian Ministry of Defence website was hacked by the Chinese? 😂

The Zen theme had its fifth birthday on October 11, 2011. While that milestone just slipped past without my notice, I’ve recently been thinking a lot about things that I’m grateful for. Zen, like Drupal core, improves because of the influx of new ideas and solutions to shared problems. And I’m extremely thankful to all those that have contributed their work.

More than simply saying “Thank you” to all those who’ve contributed patches to both the code and the documentation, I’ve decided to convert each contributor’s name into an actual Git commit. That sounds pretty geeky, but the real purpose of those commits is so each person’s name shows prominently where it belongs… on Zen’s Maintainers page.

I have a really useful Git tip for project maintainers below. But I’d also ask that you please join me (in the comments of this post) in thanking all of the people who have contributed to make Zen great.

Steve Fisher and I have talked about “designing in the open” on our Using Blue video podcast. The current design on that website is a work in progress; as we figure out how users are interacting with the content, we’ll tweak and refine the design. The concept is particularly useful in combating “the perfect is the enemy of the good.”

With my personal website, I’d like to extend the designing in the open concept right down to the roots. This site needs to be upgraded to Drupal 7, so I’ve decided to document and illustrate the entire process of rebooting my website.

This will not be a simple upgrade. I’ll be re-thinking the purpose and goals of my site and rebuilding it from the ground up. And I’ll be attempting to incorporate a myriad of design principles and best practices as I go.

The two biggest things that have bothered me as maintainer of the Zen theme is:

With the latest release of Zen of I've tried to address both points. Zen 6.x-1.1 is now out and with it Zen has slimmed down… by jettisoning the Zen Classic sub-theme. :-) 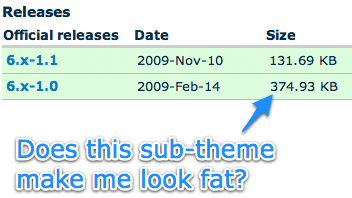 A few days ago, Jeff Burns wrote “Source Order: why I think Zen gets this wrong”.

His basic premise is that content-first HTML source ordering is an SEO-driven idea, is not backed by any accessibility studies, and goes against user expectations. While I respect his opinions, um… he’s wrong. :-)

I was just interviewed by Jeff Robbins for Lullabot podcast #55. I’ve listened to this Drupal-lovin’ podcast since its inception, so it was pretty cool to be asked to do an an interview.

We mostly talked about the Zen theme, which I’ve put a lot of work into and, if you don’t already know, is a fantastic foundation from which to build your own custom-designed Drupal theme.

After a month and a half beta period with only 5 bugs discovered (and squashed), the O-fficial Zen 5.x-1.0 version has been released. Yay!

Thanks to everyone who helped with new features, bug fixes and documentation suggestions! The help is greatly appreciated!

For those of you who haven't looked at Zen since its 5.x-0.6 days, take it for a spin. No longer do you need to un-theme the Deliciously Blue style out of Zen before adding your own styles. It’s a true base theme.